6,124 TUOHY members around the world 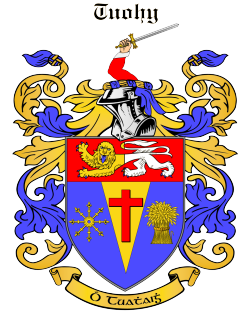 Design your own TUOHY Family Crest

Recorded in many spellings including O' Towie, O' Tuohy, O' Towey, Tuohy, Twohig, Twohy, Twoohy, Toohy, Tuhy, Tooey, Toohey, Towey, Towhey, Touey, and possibly others, this is a modern form of the ancient pre 10th century Gaelic O' Tuathaigh meaning the descendant of the chief". This chief who ever he was, ruled over a "tuath," meaning a tribal territory. The clan are from the gathering known as Ui Maine, and were formerly of South Galway, but are now mainly associated with County Clare. The clan were known for their musicians and particularly their pipers. Patrick Twohey was a famous piper in late Victorian times, and he was the son, grandson, and they say great grandson, of equally proficient pipers...

Tell us about any famous TUOHY (or surname variant) you think we should add here. We will get our genealogists to check them out and add them to the list. Thanks!

Join the conversation with the TUOHY tribe

Areas of Origin for TUOHY

Write an email address and click 'Invite' to share this page with more members of the TUOHY tribe.

Discover where the TUOHY Family members live around the world

Show off the TUOHY Family Crest…