56,756 O'SULLIVAN members around the world 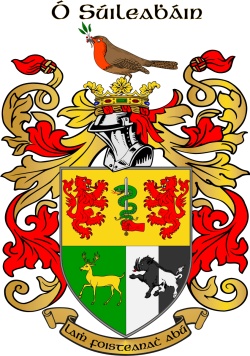 Ó Súleabháin- anglicised as Sullivan, and meaning either ?one-eyed? or ?hawk-eyed?, according to MacLysaght ('Irish Families' 1980) . Woulfe, however, in ?Sloinnte Gaedheal is Gall? (1923) says it is ?súil-dubhán' and means 'black-eyed'.

Ó Súleachán- originally anglicised as Sullehan and Sullahan, is mentioned by both Woulfe and MacLysaght as being absorbed by Sullivan.

(O) Sullivan is heavily concentrated in Munster, their original homeland being in south Co Tipperary, just above the town of Cahir on the river Suir. In the period following the Norman incursions they spread into Cos Cork, Kerry and Limerick, where their numbers remain. Descended from the legendary Eoghan Mor, they were of the leading families of the Eoghanacht. It was in the extreme south west of Munster that they developed into the powerful dynasties of O' Sullivan Mor and O' Sullivan Beare. They appear in the Irish Annals from this period onwards. The north shore of Kenmare Bay, Bantry and the Beare Peninsular belonged to these powerful clans. From these territories they fought with the Elizabethan Conquistadores like Grey and Raleigh with bitter determination.

O' Sullahan, which was also anglicised Sullivan, was a name of Cos Longford, Cavan and Louth.

In Sir William Petty's '1659 Census' of Ireland the following appear in the list of Principal Irish Names:

I found no trace of them in Petty's returns for Co Tipperary. Nor have I found any name resembling Sullivan or Sullahan in Petty for Cos Longford and Louth. There are no returns for Cavan in Petty.

(O) Sullivan has been the most common surname in Munster for some time, and is third most numerous in all Ireland.

Two famous (O) Sullivans (among so many!):
Donal O' Sullivan Beare (1560-1618) a great military leader, who is remembered for his amazing march to Ulster after the defeat at Kinsale.
Colonel John William Sullivan (b 1700) was Bonny Prince Charlie's adviser and supporter in the 1745 Jacobite Rebellion.

Tell us about any famous O'SULLIVAN (or surname variant) you think we should add here. We will get our genealogists to check them out and add them to the list. Thanks!

Join the conversation with the O'SULLIVAN tribe

Areas of Origin for O'SULLIVAN

Write an email address and click 'Invite' to share this page with more members of the O'SULLIVAN tribe.

Discover where the O'SULLIVAN Family members live around the world

Show off the O'SULLIVAN Family Crest…